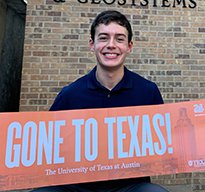 Joshua Garcia is an incoming Petroleum Engineering student at the University of Texas at Austin. He was born and raised in the city of Corpus Christi, Texas, a growing city along the beautiful Texas coast.

During high school, Joshua strived to take the highest level courses he could and promised to challenge himself to ensure that he could have a promising future, as well as joining several organizations that interested him. He was a member of his school’s National Honor Society, Science National Honor Society, as well as Sociedad Honoraria Hispánica, which he served as a co-secretary. Additionally, during the second half of his senior year, and during this past summer, he worked at Mathnasium. While working as an instructor, Joshua tutored a wide range of students, from young kindergarteners all the way to high schoolers taking advanced algebra classes. His life so far has certainly been a rollercoaster to say the least, but every experience that he has had so far has help shaped him into the person that he is today.

Joshua is both honored and blessed to receive this award and sends his deepest gratitude to the Society of Petroleum Engineers for awarding him with this scholarship. He dedicates this award to both his parents, who kept him on the right path as a child and never gave up on the dreams he had. Additionally, he dedicates this to both his late aunt and grandfather, who were two people who both undeniably uplifted him to be the best version of himself and to simply treat others with kindness and respect. He would like to thank the owner and center director at Mathnasium who, although he has known them for a limited time, both inspired him to have a strong work ethic, as well as to go the extra mile with whatever task he may have.

Finally, Joshua would like to thank his cousins for always supporting him and influencing him to pursue a career in the petroleum industry. This award will lift a huge financial burden off of his shoulders, as well as inspire him to become a leader in the petroleum industry. Joshua hopes to one day be able to collaborate with other leaders of this industry to help lead a newer, cleaner age of oil production and to ensure that the many unfortunate incidents that have occurred in the past never happen again.

Return to Archie Past Recipient page