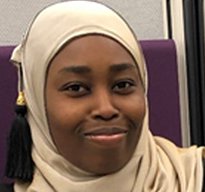 Fatima is currently a PhD Student and Research Assistant in the Enhanced Oil Recovery Lab at Louisiana State University, working with Dr. Dandina Rao. Her research is focused on gas enhanced oil recovery in unconventional reservoirs. Her ultimate goal is to become a subject matter expert in Enhanced Oil Recovery/Reservoir Engineering.

She earned her BSc in Petroleum Engineering from the University of Ibadan, Nigeria in 2011 with the sponsorship of Shell Nigeria. In 2014, she was awarded the Petroleum Technology Development Fund Overseas Scholarship (PTDF) for a Petroleum Engineering MSc degree at Heriot-Watt University, Edinburgh, U.K. During her MSc program, she led the Heriot-Watt University PetroBowl Team to the Regionals and Championship at ATCE. She worked briefly as a Reservoir Engineer between 2016 to 2017 in Nigeria before deciding to pursue a PhD in Petroleum Engineering at Louisiana State University, U.S.A. In September 2018, Fatima, as part of the LSU PetroBowl Team in which she was the only female member, participated in the SPE International PetroBowl Championship, ATCE 2018, Dallas, Texas, USA and won 2nd Place in the world and 1st in the United States.

This award is funded through SPEs Parent Organization the American Institute of Mining, Metallurgical and Petroleum Engineers (AIME). This award is presented to one student from each of AIMEs affiliated organizations in honor of Henry DeWitt Smith.