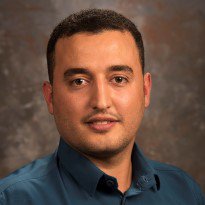 Karem Al-Garadi is currently a PhD student in the Petroleum Engineering Department and a Graduate Research Assistant in the Center of Innovation for Flow through Porous Media at the University of Wyoming, USA. Karem’s current research interest focuses on studying phase behavior of hydrocarbons in nano-scale confinement (ex., shale). In addition, he has worked on various Petroleum Engineering research areas such as Petrophysics, EOR, and NMR applications in oil and gas industry. Karem has published several granted US patents, research articles and conference papers. Moreover, he has been working as a Reviewer for Energy & Fuels journal since June 2022.

Karem holds both bachelor’s (Frist-class honor) and master’s degrees in Petroleum Engineering from King Fahd University of Petroleum & Minerals (KFUPM) in KSA. He worked as a Grading Assistant, and then a Graduate Teaching Assistant at KFUPM. In addition, he joined the University of Western Australia as a Visiting Research Student where he received an extensive training program on the use of specialist NMR techniques for analysis of reservoir rocks and fluids. Karem has field experience such that he completed his summer internship at Daqing Saudi Arabia Ltd., KSA.

Karem is a member of SPE. Also, he is the International Students Association (ISA) Representative at Wyoming University for 2022-2023 academic year. He was an active member of Visitations Club and SPE Chapter at KFUPM. Karem has participated in different volunteering activities such as the Annual Volunteering Day at KFUPM.

Karem has received numerous grants and awards during his career. For example, he was granted full scholarships to do his bachelor’s, master’s, and PhD degrees. In addition, he won the first rank senior design project at KFUPM Senior Design Expo. Furthermore, he received the Recognition of Scientific Patents award from KFUPM.