Addressing the Pressing Challenges in the Drilling Industry 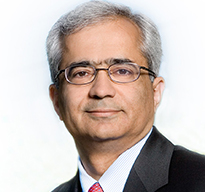 Ashok Belani is Executive Vice President Technology, a position he assumed in August 2011. Belani is responsible for the Schlumberger Research, Engineering, Manufacturing, Technology, Lifecycle Management, Software Technology, and Information Technology. Since 2013, he has also led the Marketing, Sales and Account Management functions for Schlumberger. Prior to this appointment Belani served as president, Reservoir Characterisation and earlier as chief technology officer.

Belani joined Schlumberger as a field engineer in 1980 and worked for 10 years in different field positions in operations, sales, and management. He then transferred to product development and held positions in engineering, marketing and technique, and technology management. He served as vice president of Marketing and Product Development for Wireline and later as vice president of Marketing and Product Development for Oilfield Services. He later held the position of chief information officer of Schlumberger Limited. Between 2000 and 2004, Belani managed the Schlumberger semiconductor equipment business in California, where he led a leveraged buyout to a private equity firm, listed the company on Nasdaq as CEO, and then sold it to Credence Systems. Belani studied electrical engineering in India and holds a graduate degree in petroleum engineering from Stanford University. He serves on the Advisory Board for the School of Earth Sciences at Stanford University, and the Board of Moscow Institute of Physics and Technology. He also serves on the Board of Liquid Robotics Inc.