Young professionals will have the chance to discuss industry and career topics with experienced professionals in a relaxed setting. Simply indicate that you are a young professional on the registration form to receive information about the luncheon. 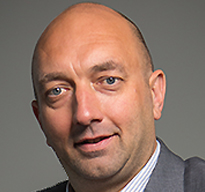 Neil Saunders is responsible for all product lines, systems and global operations of the Subsea Systems & Drilling business unit. Prior to his current role, Neil was the Global Leader for Subsea Production Systems, with responsibility for product lines, systems, project execution and operations at GE’s major subsea-dedicated facilities, including Trees, Controls, Manifolds, Connection Systems and Power & Processing.

Neil has in-depth industry experience gained from a career spanning more than 25 years in upstream oil and gas. He initially joined GE through Vetco Gray within the Subsea Controls business in Nailsea (Bristol), before a move to Aberdeen in 2002. Five years later, Neil was appointed Senior Vice President for a newly formed Global Services business, first based in Houston, before returning to Aberdeen in 2009. Neil moved to the Subsea Production Systems Project office when it was established in Bristol in 2013. He continues to be based in the Bristol Project office and regularly works from the company’s Aberdeen and London offices.

Before joining Vetco Gray in 1991, Neil worked for British Aerospace. He has an MSc in Subsea Engineering from Cranfield University and an MBA from Henley Management College. Neil is a Chartered Engineer and a Fellow of the Institute of Marine Engineering, Science and Technology. 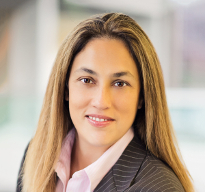 Anchala Klein has 26 years industry experience in Wells services, engineering and operations. In the last 18 years Anchala has held technical and leadership roles across BP’s portfolio from deepwater developments to onshore exploration in the North Sea, Angola, Russia, North Africa and Australia as well as in Drilling Technology. Anchala holds a Bachelor of Sciences degree in Aeronautical Engineering from City University, London.