Thank you for attending the SPE Liquids-Rich Basins Conference–North America.
Plan your attendance to other SPE events in your region or technical area.

The Liquids-Rich Basins Conference–North America is devoted to presenting new advances in technology, operations, and best practices. This conference highlighted innovative techniques and the development of tactics driving the exploitation of liquids-rich formations. 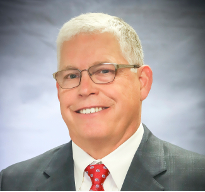 Chuck Meloy joined Endeavor as President and Chief Executive Officer in February 2016.  Prior to his employment with Endeavor, he was Executive Vice President of U. S. Onshore Exploration and Production with Anadarko Petroleum, until his retirement in 2015.  Prior to Anadarko, he served as Vice President of Exploration and Production for Kerr-McGee.  Chuck graduated from Texas A&M with a Bachelor of Science degree in Chemical Engineering in 1982.

Mr. Meloy has previously served as Board member for Western Gas Equity Partners, the Board of Directors of the Independent Producers of America Association, member of the API Upstream Committee and is an active Member of the Society of Petroleum Engineers and Texas Professional Engineers.

More about the Keynote session ►

Thank You to Our Sponsors