Click on a question below to see the answer.

Why does SPE have an awards program?

Peer recognition is an important aspect of every professional organization. SPE members make many significant technical, professional, and service contributions to the worldwide petroleum industry.

The SPE Awards Program recognizes our members’ contributions to the oil and gas industry and petroleum engineering profession. Additionally, these awards recognize exceptional service in the Society and greater community.

How does the SPE awards program work?

The SPE awards program is nominator-driven. You cannot submit your own nomination.

What are the differences between SPE International and SPE Regional awards?

There are different requirements, procedures, nomination forms, and deadlines for each of these SPE award programs:

You can send questions about SPE Regional Awards to:

You can send questions about SPE International Awards to:

What nomination and recipient statistics do you have available for the International Awards?

SPE carefully monitors all programs available to members. The SPE International Awards are tracked against the SPE year-end professional membership to ensure that participation in the program reflects SPE’s diverse membership. 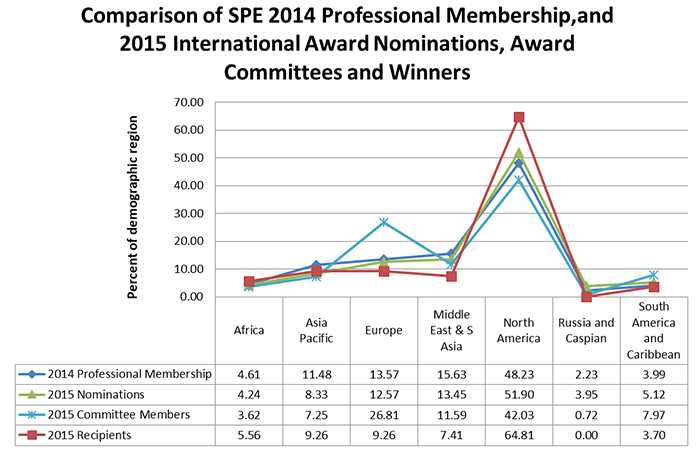 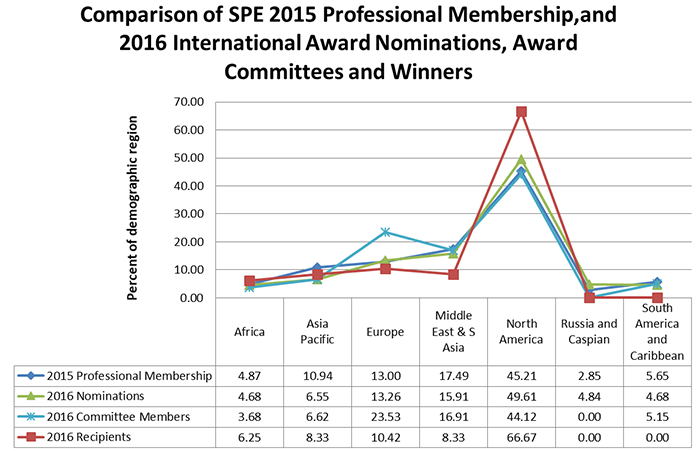 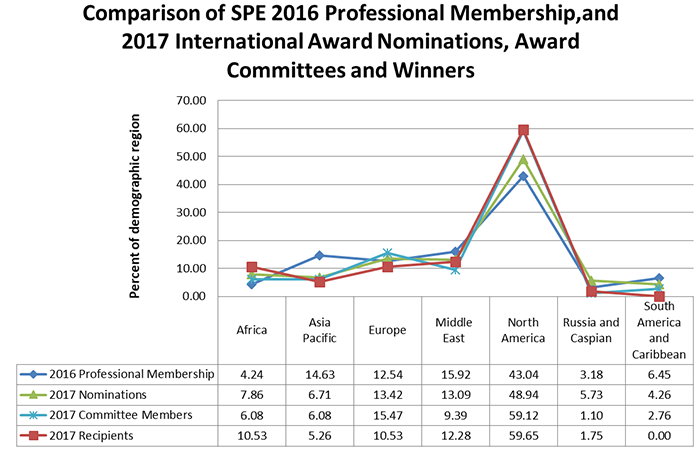 Can I nominate someone for a regional award and the corresponding international award at the same time?

Yes. However, it is recommended that you carefully review the award requirements and the scope of the candidate’s significant achievement, and then nominate the candidate for the more appropriate award.

What are the SPE International awards?

There are 21 international awards in 3 categories:

What are the SPE Regional awards?

There are 13 Regional awards in 2 categories. Learn what SPE Regional Awards recognize.

When can I nominate someone for an SPE award?

How do I nominate someone for an SPE award?

You will need your SPE login to access the international nomination form. Your login is the email address on your SPE member record, and your SPE password. You can use the login help link, or contact service@spe.org for assistance with your SPE login and password.

You will need your SPE login to access the regional nomination form. Your login is the email address on your SPE member record, and your SPE password. You can use the login help link, or contact service@spe.org for assistance with your SPE login and password.

Do I have to receive a regional award before being considered for an international award?

No. It is not necessary for a candidate to have received a regional award to be considered for an SPE International award.

What do award committees look for in an SPE international award nomination?

Award committees expect you to provide a full and complete statement of your reasons for proposing your candidate for the award and details of your candidate's professional and industrial achievements supporting the award requirements in sufficient detail to enable to the committee to pass judgment on the candidate's worthiness to receive the award. You should provide:

Do award nominees have to be members of SPE?

All but five international awards require the candidate to be an SPE professional member in good standing. The five exceptions that do not require SPE membership are:

In the case of the Cedric K. Ferguson Medal and Certificate, the candidate author(s) must be an SPE member in good standing at both the time of peer approval and when the award is presented. The Ferguson Medal is the only SPE award that can be presented to a student member of SPE.

Are there any age limits on SPE award nominations?

There are no other age requirements for SPE International Awards.

Are students qualified for SPE awards?

No. The SPE Awards Program is for professional members. Candidates for awards requiring membership must be professional SPE members.

The exception is the Cedric K. Ferguson Medal. It is the only SPE award that can be presented to a student member of SPE.

Students can check with their chapter to learn about local awards available to student members of SPE.

Can someone serve on a committee and still be an award nominee?

Members of the SPE Board of Directors are not eligible for international awards for the duration of and for 2 years after the expiration of their term of service, with the exception of the SPE president, who automatically becomes a Distinguished Member upon the completion of his or her term.

International award committee members are not eligible for the award they are judging for the duration of and for two years after the expiration of their term of service.

How long does someone remain a candidate for an international award?

If updated by the original nominator, regional winner nominations entering international consideration will remain active for three years. If not updated, regional recipient nominations will be considered for one year.

After a nomination expires at the end of the three-year cycle, you can renominate the candidate if they still meet the award criteria.

Can I review my award nomination?

Can I remove a nomination I submitted?

How many times can someone receive an award?

An individual may receive each international award only once, with one exception. The Cedric K. Ferguson Certificate, which is presented to coauthors of papers selected for the Ferguson Medal who are professional members in good standing over the age of 35, can be received more than once.

What are the deadlines for SPE award nominations?

International Award Nomination Deadlines: SPE staff must receive all international award nominations and letters of recommendation by 15 February. There are no extensions.

Regional Award Nomination Deadlines: SPE staff must receive all regional award nominations by 1 March. There are no extensions.

Where do I send award nominations?

You can make regional award nominations during the call for nominations by logging in to https://app.wizehive.com/apps/menu/speregionalawards.

You will need an SPE login to access the nomination form. Your login is the email address on your SPE member record, and your SPE password. You can use the login help link, or contact service@spe.org for assistance with your SPE login and password.

How are award committee members selected?

SPE international award committees consist of six or more geographically diverse SPE members serving 3-year terms. The SPE President-elect annually appoints two committee members to each award committee. These appointments are subject to the approval of the SPE Board of Directors. Committee members have an interest in the discipline of the award, and are distributed geographically as widely as possible.

What are the length-of-membership honors?

SPE recognizes members who maintain their membership for 25 years or more. No nominations are necessary. The three length of membership distinctions are:

You can direct questions about these honors to service@spe.org.

Can I nominate a colleague for the Ferguson Medal?

SPE members ordinarily resident in a country embargoed or sanctioned by the United States government and European Union are not eligible to participate in the SPE Awards Program. Click here for more information.

When will I find out the names of the award recipients?

What do award recipients receive?

International award recipients are presented with a certificate, plaque, or medal commemorating their achievement. They receive complimentary registration for the Annual Technical Conference and Exhibition (ATCE) and tickets to the event at which the award will be presented in front of their professional peers – either the Annual Awards Banquet or President’s Luncheon.

Regional award recipients receive a trophy that is presented by the Regional Director at an appropriate regional meeting.

Who can I contact with questions about the SPE Awards Program?

You can send questions about SPE Awards to: