Estimates derived under these definitions rely on the integrity, skill, and judgement of the evaluator and are affected by the geological complexity, stage of exploration or development, degree of depletion of the reservoirs, and amount of available data. Use of the definitions should sharpen the distinction between various classifications and provide more consistent resources reporting.

It is recognized that all Petroleum-initially-in-place quantities may constitute potentially recoverable resources since the estimation of the proportion which may be recoverable can be subject to significant uncertainty and will change with variations in commercial circumstances, technological developments and data availability. A portion of those quantities classified as Unrecoverable may become recoverable resources in the future as commercial circumstances change, technological developments occur, or additional data are acquired.

Discovered Petroleum-initially-in-place is that quantity of petroleum which is estimated, on a given date, to be contained in known accumulations, plus those quantities already produced therefrom. Discovered Petroleum-initially-in-place may be subdivided into Commercial and Sub-commercial categories, with the estimated potentially recoverable portion being classified as Reserves and Contingent Resources respectively, as defined below.

RESERVES. Reserves are defined as those quantities of petroleum which are anticipated to be commercially recovered from known accumulations from a given date forward. Reference should be made to the full SPE/WPC Petroleum Reserves Definitions for the complete definitions and guidelines.

Estimated recoverable quantities from known accumulations which do not fulfil the requirement of commerciality should be classified as Contingent Resources, as defined below. The definition of commerciality for an accumulation will vary according to local conditions and circumstances and is left to the discretion of the country or company concerned. However, reserves must still be categorized according to the specific criteria of the SPE/WPC definitions and therefore proved reserves will be limited to those quantities that are commercial under current economic conditions, while probable and possible reserves may be based on future economic conditions. In general, quantities should not be classified as reserves unless there is an expectation that the accumulation will be developed and placed on production within a reasonable timeframe.

In certain circumstances, reserves may be assigned even though development may not occur for some time. An example of this would be where fields are dedicated to a long-term supply contract and will only be developed as and when they are required to satisfy that contract.

Contingent Resources are those quantities of petroleum which are estimated, on a given date, to be potentially recoverable from known accumulations, but which are not currently considered to be commercially recoverable.

It is recognized that some ambiguity may exist between the definitions of contingent resources and unproved reserves. This is a reflection of variations in current industry practice. It is recommended that if the degree of commitment is not such that the accumulation is expected to be developed and placed on production within a reasonable timeframe, the estimated recoverable volumes for the accumulation be classified as contingent resources.

Contingent Resources may include, for example, accumulations for which there is currently no viable market, or where commercial recovery is dependent on the development of new technology, or where evaluation of the accumulation is still at an early stage.

Prospective Resources are those quantities of petroleum which are estimated, on a given date, to be potentially recoverable from undiscovered accumulations.

Estimated Ultimate Recovery (EUR) is not a resource category as such, but a term which may be applied to an individual accumulation of any status/maturity (discovered or undiscovered). Estimated Ultimate Recovery is defined as those quantities of petroleum which are estimated, on a given date, to be potentially recoverable from an accumulation, plus those quantities already produced therefrom.

The Range of Uncertainty, as shown in Figure 1, reflects a reasonable range of estimated potentially recoverable volumes for an individual accumulation. Any estimation of resource quantities for an accumulation is subject to both technical and commercial uncertainties, and should, in general, be quoted as a range. In the case of reserves, and where appropriate, this range of uncertainty can be reflected in estimates for Proved Reserves (1P), Proved plus Probable Reserves (2P) and Proved plus Probable plus Possible Reserves (3P) scenarios. For other resource categories, the terms Low Estimate, Best Estimate and High Estimate are recommended.

The term "Best Estimate" is used here as a generic expression for the estimate considered to be the closest to the quantity that will actually be recovered from the accumulation between the date of the estimate and the time of abandonment. If probabilistic methods are used, this term would generally be a measure of central tendency of the uncertainty distribution (most likely/mode, median/P50 or mean). The terms "Low Estimate" and "High Estimate" should provide a reasonable assessment of the range of uncertainty in the Best Estimate. 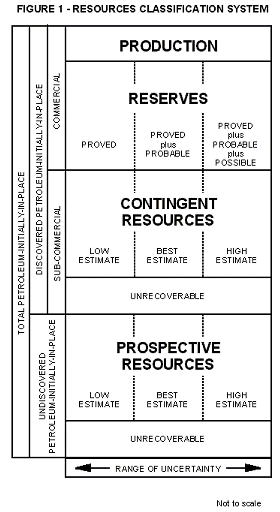 As indicated in Figure 1, the Low, Best and High Estimates of potentially recoverable volumes should reflect some comparability with the reserves categories of Proved, Proved plus Probable and Proved plus Probable plus Possible, respectively. While there may be a significant risk that sub-commercial or undiscovered accumulations will not achieve commercial production, it is useful to consider the range of potentially recoverable volumes independently of such a risk.

If probabilistic methods are used, these estimated quantities should be based on methodologies analogous to those applicable to the definitions of reserves; therefore, in general, there should be at least a 90% probability that, assuming the accumulation is developed, the quantities actually recovered will equal or exceed the Low Estimate. In addition, an equivalent probability value of 10% should, in general, be used for the High Estimate. Where deterministic methods are used, a similar analogy to the reserves definitions should be followed.

As one possible example, consider an accumulation that is currently not commercial due solely to the lack of a market. The estimated recoverable volumes are classified as Contingent Resources, with Low, Best and High estimates. Where a market is subsequently developed, and in the absence of any new technical data, the accumulation moves up into the Reserves category and the Proved Reserves estimate would be expected to approximate the previous Low Estimate.